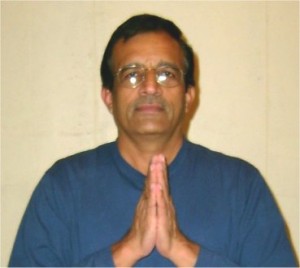 Namaste. How did YOU land up here? Anyway a hearty welcome. I am Rajan Narayanaswamy with the last name a name of Lord Vishnu. But I am quite an ordinary person with a passion to teach and learn Yoga and Vedanta. By some strange grace of providence I was chosen to live for 21 years in Varanasi, the holiest city of the Hindus, the land that gave us Kabir, Tulsidas, Lahiri Mahasaya and, just 18 kms away, Sarnath where the Buddha chose to deliver his first sermon. No simple land this Varanasi – at every step a bull or cow that would, in its gentleness, tremblingly close its eyes when you reached out to pat its head, sadhus anointed in ash intoning Bam Bam Bhole as they walked the gallis (narrow streets) to the mighty Ganga, the distant sounds of ringing manjiras and drums – the air was always afloat with calls of the Infinite and Eternal. Such was the spiritual intoxication of Varanasi. Today, time and economic progress have changed Varanasi – the holy Ganga has got polluted and the sadhus and sanyasis struggle to eke out a living. But I cannot forget the seed that Varanasi sowed in me which today has bloomed as a passionate interest in Yoga and Vedanta.

I started off in Massachusetts and now live in New Jersey in the USA and am actively involved in the Chinmaya Vrindavan ashram of the Chinmaya Mission. By a series of co-incidences, I found the revered Yoga and Vedanta teacher, Late Dr. V.S Rao in MA and had the opportunity and honor to drive him to his classes at the Chelmsford Library for sometime. Of course, I also attended his classes and benefited greatly by his able guidance on the spiritual path. Once I moved to NJ in 1997, I continued my Yogic and Vedantic journey via the Chinmaya Mission. We have a very learned Swami Shantananda as our revered Acharya. Swamiji is a direct disciple of the famous Swami Chinmayananda. I have had (and still have) the honor and opportunity of learning the Bhagavad Gita and Upanishads under his guidance. In the Chinmaya Vrindavan ashram, I teach Yoga classes on Saturday mornings and also moderate a study group for adults on Sundays. Recently we have completed Tattvabodha and Bhaja Govindam of Adi Shankaracharya and Upadesa Saram of Ramana Maharshi. This year (2012-2013) our study group will be taking up Atma Bodha of Adi Shankaracharya. What can I say, this has been a beautiful journey for me for which I am ever grateful to Lord Shiva and Krishna and all my Gurus. I would love to receive a note from you – send me a message at rajan@yogaforbliss.org

Welcome again. I pray and wish that you may also be as lucky as me. May Peace always be with you.

One Response to About Me